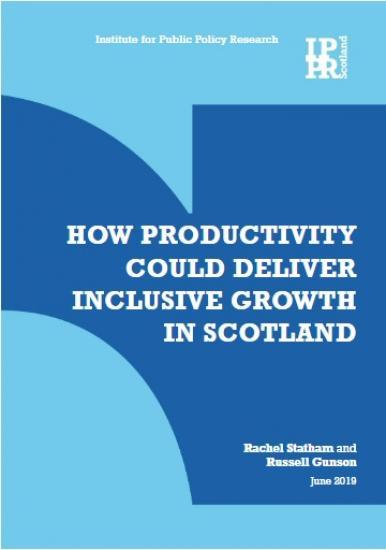 A new report from the Institute for Public Policy Research (IPPR) sets out how productivity could deliver inclusive growth for Scotland. In 2015, the Scottish government launched a new economic strategy with inclusive growth as a key aim at its centre. According to the report, inclusive growth

‘is the idea of delivering stronger economic growth that in and of itself narrows inequalities, rather than relying solely on government intervention to redistribute the proceeds of growth. Rather than being blind to the shape and direction of economic growth, inclusive growth is an attempt to shape growth to deliver the social outcomes we wish to see.’

The report begins by ‘setting the scene’ of the UK since the financial crash in 2008: ‘productivity rates have been close to flat … with a resultant stagnation in living standards and economic growth’. Despite ‘catching up with UK pay and productivity levels in the first decade or so of devolution’, in recent years average pay growth has been lower in Scotland than in the rest of the UK and Scotland’s economy has ‘struggled to maintain consistent growth in productivity rates … as the key means of driving up a country’s average living standards over the long term, productivity growth is incredibly important to social and economic outcomes’.

The report explores various ways to boost productivity in Scotland, which inevitably would drive growth, but goes on to point out that ‘whether this growth is inclusive, narrowing inequalities, or whether it drives further economic inequality will depend on the decisions taken by policymakers’.

Other recommendations include a new Committee on the Future Inclusive Economy, new sector-based social partnership bodies, and increasing investment in in-work learning for lower-paid workers. The Scottish government should focus on the ‘everyday economy’ and not just the ‘high-performing growth sectors’, a focus which should be included specifically within the Scottish National Investment Bank’s ‘mission’ in order to realise inclusive growth in Scotland.