NEF on how to rebuild trust for transition | Rethinking Poverty 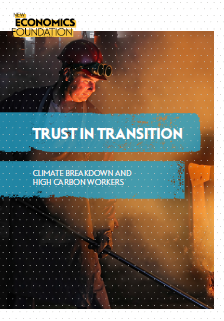 The New Economics Foundation has published its report Trust in Transition, which argues that the ‘rebuilding of trust in transition to a zero-carbon economy is perhaps the central political challenge facing the UK as it decarbonises’ and sets out ways in which this can be achieved.

The report begins by exploring the ‘crisis of trust’ in the UK: ‘people and places at the sharp end of our broken economic system have been largely powerless in its face’, which has resulted in a lack of trust in elites, ‘industrial heartlands lacking trust in the direction of industrial change, and trade unions and workers lack trust in government’. It argues that trust ‘is essential for a national mission to respond proactively and fairly to the climate and ecological crisis’ and calls for a Green New Deal that would respond to ‘our economic, environmental, and social crises together’.

It goes on to look at what a just transition actually means:

It explores the scale of transition required arguing that ‘a significantly more ambitious net-zero target date than 2050 is needed’. It also acknowledges that the ‘higher carbon industries are disproportionately located in the parts of the country that have relatively low GVA [gross value added] per capita’, and so ‘delivering a just transition is therefore principally about addressing distinct challenges posed for particular places, regions, and industrial clusters’.

The report then explores the worker perspective and potential resistance to transition, arguing that ‘empathy is key to trust and should be at the core of any consensus building and successful dialogue’. An important part of this would be privileging ‘the voices of the people and places that are most affected’ and revising trade union legislation to ‘ensure that workers are empowered to play an active role’ in co-designing the industrial strategy.

It goes on to state the need for ‘localised transition planning’, as the ‘precision of the just transition can only be delivered and shaped locally’. It recommends that ‘national carbon budgets should be mapped against the needs of regions or localities’ and the establishment of ‘new combined city and county regional authorities and new local economic partnerships (LEPs) with a broader mandate and more democratic membership than existing ones’. Other recommendations include establishing a new Just Transition Fund ‘for local and regional use to support essential non-capital measures’, in part funded by redirecting current economic support for fossil fuels.

‘Delivering a just transition will not happen at scale without challenging some of the fundamentals of our failing economic system. What we really need is not so much a just “transition” as a just “transformation” of our industry and economy, and just as importantly, of the power relationships and priorities that govern them. Trust is the currency of transition, and it is in woefully short supply in the UK.’