The New Economics Foundation have published their Review of the Year, which looks at all their activity in 2019, with a particular focus on their ‘three missions to transform our failing economy’. 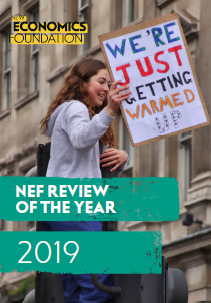 NEF’s first mission is building the foundations of a New Social Settlement, ‘to ensure people are paid well and have high wellbeing’. The report argues that ‘after decades of privatisation and liberalisation, austerity is the final nail in the coffin of the post-war social settlement’. With people living in ‘tents and doorways’, ‘a deeply flawed welfare system, and the proliferation of poor quality, insecure and low-paid work’, we need a ‘new social settlement fit for the 21st century’. Policies include implementing Universal Basic Services, paying everyone a Weekly National Allowance and moving towards a four-day working week. NEF also advocate building 200,000 social homes, increasing rights for renters, and community-led regeneration rather than gentrification to prevent people being priced out of their own areas. NEF’s No Homes for Nurses campaign gained huge attention and ‘revealed that homes being built on sold-off NHS land would be out of the reach of most of the staff on which the health service depends’.

Their second mission is a Green New Deal (GND), a ‘radical economy-wide plan to halt climate change and restore nature’. The GND would also deliver a just transition, which NEF view as paramount: ‘tackling climate change must go hand in hand with tackling inequality’. They have worked on developing several policies that form the GND. Financing ‘the largest peacetime mobilisation of resources in UK history’ would require ‘the government’s fiscal rules to be reformed’, a debate NEF’s economists have managed to ‘reopen’ in 2019. As NEF argues, ‘some ask how can we afford it, we say we cannot afford not to’. NEF have similarly led an international campaign encouraging a ‘more climate interventionist model of monetary policy’ for central banks and were instrumental in the anti-fracking campaign that led to the UK-wide ban. They have also worked to ‘build common cause between the environment and trade union movements, helping to bridge the divide between climate activists and workers’. Their research has looked at restoring nature and linking ‘thriving communities to thriving habitats’.

NEF’s third mission is the Democratic Economy, devolving economic power ‘to the places where people live’, strengthening unions and worker co-operatives, and moving away from an economy that creates stark inequalities and leaves citizens voiceless. Their work includes supporting communities who are ‘shifting how a local economy works for the environment and people’, building a new co-operative nursery, and exposing how HS2 will only further entrench regional imbalances. They have also organised against air pollution in Basingstoke and have fought to protect environmental regulations. Finally, acknowledging that the ‘new data economy is creating new inequalities’, NEF have published a series of papers on harnessing ‘the power of data for the common good’.