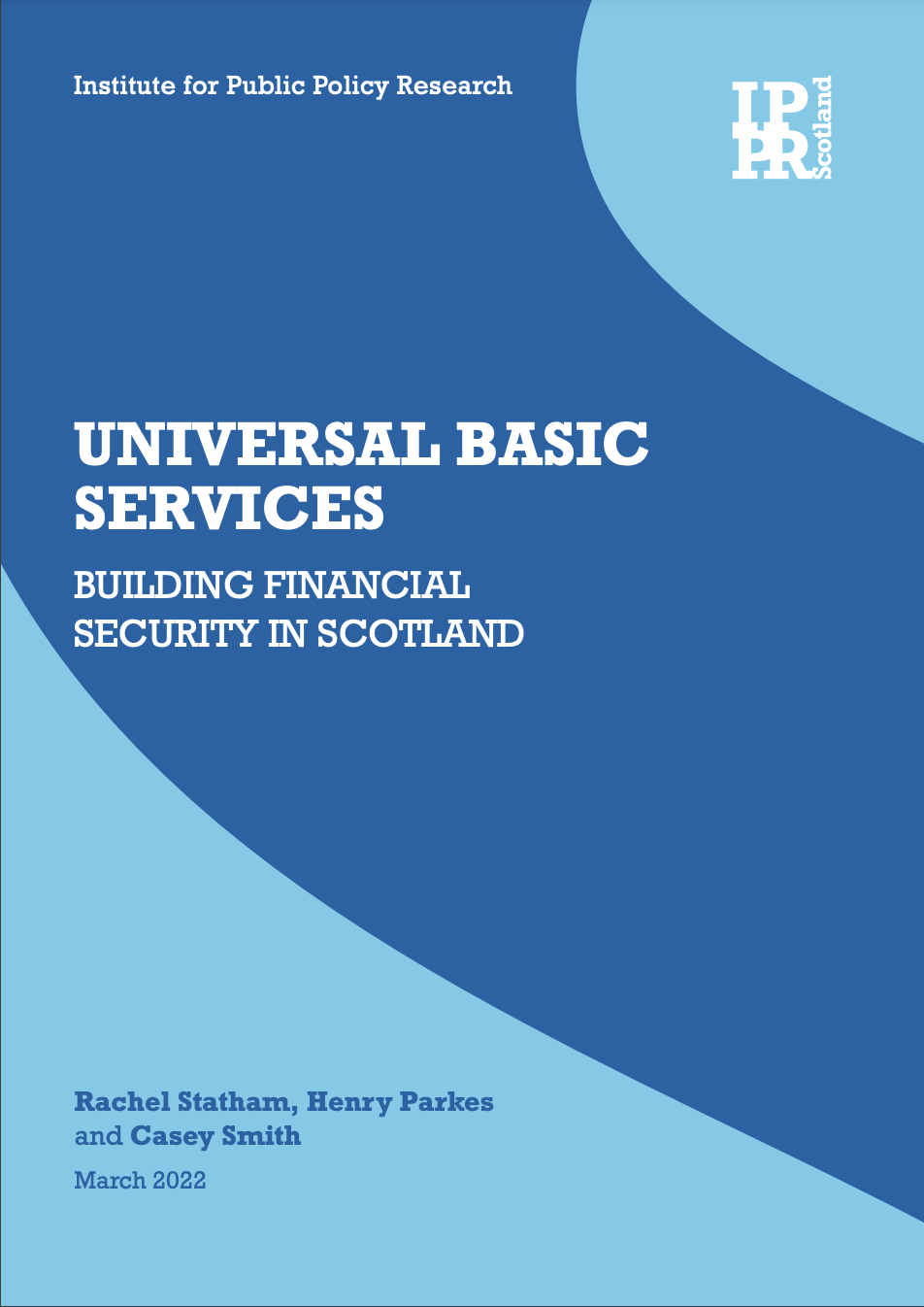 IPPR Scotland last week published their report Universal basic services: Building financial security in Scotland. Over a series of publications, IPPR Scotland has argued that in order to tackle the financial insecurity faced by many families across Scotland, policymakers should be focussed on delivering a ‘living income’ for all.

This report explores the potential for a universal basic services approach across new areas – including care, transport, information, food and utilities – to bring more people in Scotland closer to a living income. It states: ‘as we look towards a looming energy cost crisis and rising food prices, there is an acute need to help families manage in the face of rising living costs’.

The report defines a universal basic service approach as ‘a framework for providing collective services that meet basic needs’. It aims to deliver a floor for living standards in Scotland, by guaranteeing ‘a minimum standard of life’. Universal services have a key role to play in wellbeing, as well as the climate crisis, as they can meet people’s needs within our planetary limits, and continue to provide for future generations.

The paper identifies the largest costs facing families below a living income, and recommends that ‘action to reduce childcare and transport costs will be key to guaranteeing a decent standard of living for every family’. It also identifies energy, housing and food as areas in which ‘rising costs associated with meeting basic needs are putting families’ budgets under growing strain. However, it acknowledges that ‘with significant tax raising and borrowing powers reserved to Westminster, the Scottish government would not be able to move to a universal basic services approach across the range of services explored in this report immediately’. The authors of the report also propose that:

‘the Scottish government launch an independent commission on the future of public services in Scotland, to consider these questions with a view to shaping the next decade of public service innovation delivery’.

Banks vs the climate: ‘Who cares if Miami is six metres underwater in 100 years?’

At the heart of the debate on community wealth building is a fundamental question about employee ownership and who or what holds the keys to wealth in our society.... Read More

The housing affordability crisis seems impossible to solve. Policies intended to help people priced out of the market often serve to fan the flames and increase costs. An example... Read More

In its recently published Levelling Up White Paper, the government argued that the power of public procurement should be used to deliver support to communities and pledged to put... Read More

The 51%: Gender equality at the heart of a more inclusive economy

What if gender equality was at the heart of local plans for a more inclusive economy? Efforts to rebuild and recover economic prosperity in a time of crisis often... Read More

Recent years have seen a growing number of local councils across the UK, including Birmingham, Sandwell and Wigan, as well as the devolved administrations in Scotland and Wales adopting... Read More

Economists no longer talk of decarbonisation as a cost; climate action is now widely seen as an investment. Like any investment in new economic sectors, money spent is expected... Read More

Is degrowth – making less, but better – the future that the fashion world has been waiting for?

Fascinating article from the Vogue Business news site on the growing relevance of degrowth – producing and consuming less and less to mitigate climate meltdown – and fashion. It... Read More

Developing a shared framework for a hopeful future

In November 2021, a group of ten people gathered together in Letchworth Garden City for two days of conversation. We began with a clear sense of our collective failure... Read More

Steps towards a better world

Written at the outset of the pandemic, #BuildBackBetter showed how being forced to slow down had made people want a different future. Having a profound sense of vulnerability made... Read More

Plymouth Octopus is a cosmolocal CAN in action

As we know from long experience, Plymouth is a world-class powerhouse of social and civic enterprise – and it’s richly demonstrated in the Plymouth Octopus latest newsletter. POP (as... Read More

At the close of the 2021 Community Wealth Building Summit, we reflect on remarks by our opening keynote speaker Tom Arthur MSP and the work that CLES has undertaken... Read More

If Martians landed on Earth tomorrow, they would be surprised by many things, but they would be shocked by an economic system that allows a few billionaires to play... Read More

This is an article from the fourth issue of the New Economics Zine. You can read the full issue here. Last month, over 500 workers at the GKN car factory... Read More

On the eve of COP26, and with the challenges we face in tackling the climate crisis becoming ever more apparent, CLES and Carbon Co-op today release a major new toolkit for councils,  a... Read More

You can’t achieve levelling up without a Green New Deal

This is an article on levelling up and the Green New Deal from the fourth issue of the New Economics Zine. You can read the full issue here. ‘Levelling up’... Read More

Doughnuts are popular in Devon

We have long seen Devon and the English South-West as a social, economic and cultural laboratory for what might look like an “ecological civilisation”. So it’s perfectly logical that... Read More

Resources for the metropolises of the 21st century

Levelling up from the ground up

Depending on where you live in England, there can be huge differences in your quality of life. This is down to some areas’ economic decline and low incomes, but... Read More

The Bank of England’s (BoE) Monetary Policy Committee meets today, and will publish its first Monetary Policy Report since the Bank was given an updated ​‘net zero’ mandate at the... Read More

The Case for Growing our Own Beans

What does Covid-19 mean for the inclusive growth agenda?

What’s the role of inclusive growth in recovering from crisis? It’s easy to see as a ‘nice-to-have’, but can be at the centre of helping us build back better.... Read More

The results of May’s 2021 local elections will have dismayed those who care about progressive causes, as showcased in Rethinking Poverty. But can we learn anything from them about... Read More

Basic Income in the US: is the Overton window open?

Cities must cut their ‘consumption emissions’ – here’s how

Almost every city now has some form of climate target. For instance Manchester, in northern England, aims to be zero carbon by 2038. But such targets generally focus on emissions... Read More

Caring for the earth, caring for each other

During the peak of the first lockdown, people gathered on their doorsteps to clap for carers. Now it’s time to truly recognise their value. The inadequacies of England’s current... Read More

On 11th March, we released our yearly analysis of the contribution that Manchester City Council’s procurement spend makes to the city’s economy and how it can support the achievement of wider... Read More

Lack of income security is widely recognised as a major problem – and one that has been exacerbated by the Covid-19 pandemic. Could a Basic Income help? And is... Read More

The Covid-19 pandemic has shone a light on the discrepancy between the work we most urgently need as a society, and the work we value and reward. So many of... Read More

I was lucky enough to chair a panel discussion on Community Ownership and Towns this week, with Community Land Scotland, Greener Kirkcaldy, Power to Change, The Stove Network.* We recognised, with many others, the High Street... Read More

The case for a four day week

Shorter working time should be at the heart of post-pandemic recovery. That’s the message of The Case for a Four Day Week, published by Polity this month, and written by... Read More

Degrowth: why we need a new political economy

Degrowth, or he end of growth is not the end of the world, says Parrique. ‘It can be the beginning of many worlds.’ … Basically, degrowth means a decline of... Read More

This is an article from the second issue of the New Economics Zine. You can read the full issue here “The goal and objective of all economic policy should be collective... Read More

Putting place at the heart of a green recovery

With fresh discussion this week about the importance of a green recovery, it is increasingly clear that post-Covid rebuilding must have a just transition away from a carbon-based economy... Read More

How workers can take on big finance and win

The impact of Covid-19 has been a powerful reminder of the leverage workers could collectively hold. Care workers, supermarket cashiers and couriers – usually dismissed as ​“unskilled” – have demonstrated... Read More