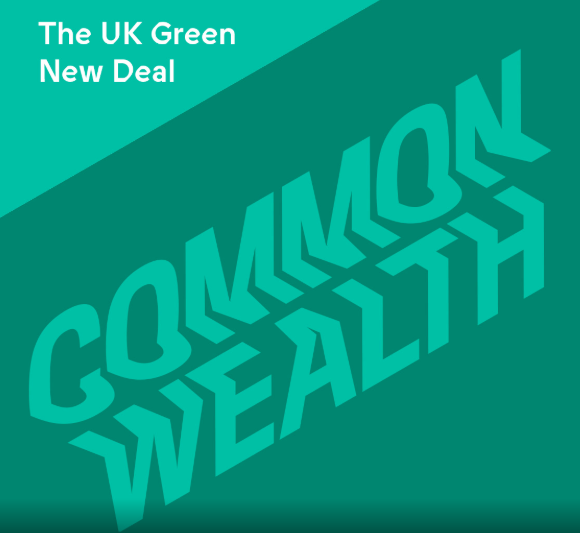 The think-tank Common Wealth this week launched their Green New Deal project, a series of reports to be published over the coming months that will serve as a ‘comprehensive road map for a Green New Deal for the UK’. Road Map to a Green New Deal: From Extraction to Stewardship, written by director and founder Mathew Lawrence, sets out the project’s aim:

‘With contributions from leading climate activists, practitioners, policy experts, and academics, it will set out detailed plans for justly and rapidly decarbonising almost two dozen sectors or institutions in six main areas.’

The six areas will be democratising finance, restructuring the economy, ‘building public affluence in place of private wealth’, decentralising the state, ‘nurturing a 21st century commons in place of extractivism’, and delivering ‘green and just multilateralism’.

Common Wealth’s road map is based on the principles that the decarbonisation needs to happen as rapidly and justly as possible, and that markets alone cannot drive the process: ‘we need a government-led process of economic restructuring.’ It is also guided by the principle that the ‘climate crisis is a crisis of inequality’ and that a Green New Deal in the UK must therefore deliver a just transition, while supporting global climate justice.

Also published is their ‘Green New Deal City of the Future 2030’: an ‘interactive guide’ that envisions a UK that, faced with climate crisis, chose the Green New Deal and ‘built an ambitious politics that matched the scale of mounting crisis … powered and led by social movements, workers, and communities’. It walks the reader through what the Green New Deal City would look like, focusing on finance, transit networks, the workplace, the commons, energy systems and housing.

As Common Wealth state on the project’s main page:

‘Only a UK Green New Deal can deliver change on the pace and scale required, restructuring our economy toward sustainability, hardwiring justice into economic and social life, repairing plundered natural systems, building resilience, and decolonising an extractive global economy.’