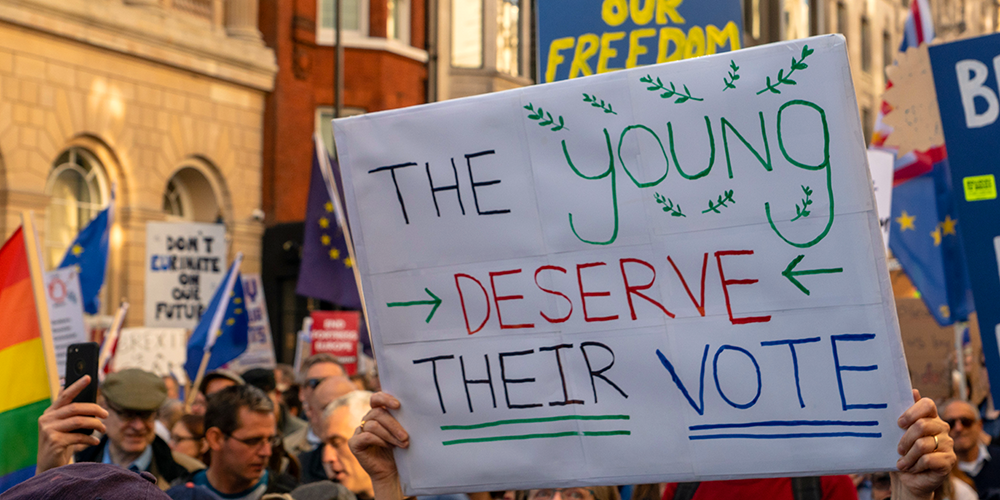 The one thing we all need after the pandemic is a new beginning. Change is in the air, whether that be ideological, legislative, or deeply personal. The theme for this year’s Orwell Youth Prize is ‘A New Direction: Starting Small’, which I see as an almost perfect description of the change I want. For me, the new direction this country needs is perhaps not small (in fact it’s undeniably large) but it centres on something small. Something very small.

A child in fact.

Picture for a moment a hustings. The party is irrelevant, but the audience is important. A sea of heads, whooping as the politicians take the stage. A few crying about the noise, some zoned out. But most are watching intently as the speeches begin. Soon, it’s time for questions. The politicians smile kindly at a raised hand in a red raincoat in row 4b. The tiny hands hold the microphone. A piping voice asks: ‘What is your stance on the use of household rhetoric in conversations about the national debt?’ The politicians all take a sip of water. It would be the cutest thing to ever happen in politics. I present you with this vision because an open mind is necessary going forward. I want people to put aside all their preconceptions about kids, and instead focus on those tiny hands in the air, begging to be heard. Done? Ok. I want all children ages 6 and up to be given the vote.

Why not? The average age of the 10 youngest state leaders is 36. By this logic, we have 30 years until today’s youngest school children, 6 year olds, are ruling the world. Any changes we make to the way the country runs must take them into account. They will not only feel the impact of current policy decisions, they will feel their sting for decades and decades into the future. And yet of all demographics in the UK, children are the most marginalised. They cannot vote, they are not expected to have opinions on the state of the country, or their schools or local areas. They are the ones who have suffered from the slashing of school budgets, youth centres and benefits. 30% of children live in poverty, and 67% of those children have one parent in work. They are living the reality of policies dreamt up by those in power. Why shouldn’t they get a say in whose policies get enacted?

The idea that children are somehow apolitical is a myth. Some children are business minded, renting the contents of their pencil cases out for steep rates in the playground. Some children feel closer to snails and ladybirds than they do to their classmates – they lie awake at night trying to picture, remember, respect every species of insect before they are lost to climate change. Some children, in fact much more than you would think, feel very strongly about libertarianism. There is a wonderful video from CBBC’s Newsround, where kids are interviewed on what they would do if they were prime minister. Their responses might not have been rhetoric or policy heavy, but they showed distinct priorities – more youth voices, a cure for cancer and better care for the elderly and homeless to name a few. Through this, they demonstrated a profound understanding of what governance should look like. Perhaps it wouldn’t do us too much harm as a society to start considering children as having a different but equally valid view of how the world works, and should work.

More to the point, why are we setting parameters for who does or doesn’t deserve the vote? In 2017, Wellington’s Victoria University conducted a poll on lowering the voting age. The primary reason given against is that ‘Young people are not informed enough, too immature and lack enough life experience to vote’. Presumably these arguments are intensified on the question of votes for 6 years and up. And yet, are these same barriers put in place for adults? When we gain the vote at 18, that’s it. You can vote for the rest of your life, rain or shine, no matter how senile, naive, suggestible, or even downright nasty (unless you’re a prisoner or in the House of Lords). There’s no exam to test how informed you are, no therapist to assess your maturity. When used against adults, supposed ‘life experience’ would seem an unfair qualifying factor for the vote. So why do we use it to exclude children?

But of course, there is always the argument of our Democracy. Giving children the vote is a shot in the dark, there’s been no research into it, we have absolutely no idea who they’d vote for. Would there be chaos? Well, first of all, British Democracy is already in deep trouble. Second, I believe that ‘votes for kids’ might be just what it needs.

Public trust in government and parliament has been declining for a long time, but it has very much deteriorated since the Brexit referendum. Both Remainers and Leave voters were dissatisfied. Throwing fuel on the fire was the 2019 deadlock in parliament, which was lengthy and painful. After pitching to the public a battle of people (or one person, Boris) vs Parliament in the 2019 election, Boris Johnson was handed power decisively, with a rise in turnout of 2 million. Since gaining his majority, Johnson has been rapidly ticking boxes on his anti-democratic bingo card; lying to the queen, illegally proroguing parliament and refusing to deal consequences to Cummings until it was too late.

I don’t have a fix for these problems. As Prof David Runciman (whose podcast inspired many of the arguments I have put forward here) states, none of us knows exactly how to ‘fix’ Democracy, and any parliament which could agree on the perfect reforms probably wouldn’t need those reforms at all. They would be functioning too well. In this case, I believe that the only solution is to do something big, blind and experimental. Shake things up. Enfranchisements change the debate in ways we can’t imagine, and this could spark so many improvements. Political education would doubtless become compulsory for all children, leading in time to a more informed electorate. I am well aware that in child-only hustings, the questions asked would not resemble the one I imagined above. However, children sometimes ask the questions adults are afraid to. If they see unfairness they will say it openly and honestly. They also have unspoken rules about behaviour, and can often sense bad faith better than adults. How might this all affect the political climate?

Furthermore, I want to live in a society where the worldview of a child is worth the same as an adult’s. If childhood means naive optimism then adulthood must mean cynicism, and I know which I would rather be. Cynicism is corrosive. We become so convinced we can’t do anything that we end up frozen, while nothing changes. Many great philosophers have proclaimed the importance of living and seeing the world with childlike wonder and joy. As we begin to see ‘childlike’ as a respected worldview and not an insult, a great weight will be lifted off our shoulders.

A huge experiment such as this could be exactly what we need to repair our attitude to Democracy. This fear of change comes from a place of mistrust for each other. Mistrust leads to fights and growing resentment, such as we have seen in the past few years. We need to do something experimental. Trust me, all will be well. Take a leap of faith in our children! And when the world doesn’t fall apart, our faith in each other, therefore Democracy, will begin to heal.

This was originally posted on the Orwell Youth Prize blog on 8th March 2021.

The UK faces an uneven decarbonisation challenge, with some regions and industries under particular pressure to reduce emissions. Many of the places and communities most acutely affected are also... Read More

To rethink Scotland, our systems need to let people in

History tells us that periods of great disruption are often followed by periods of massive social change. But last year’s’ flurry of ‘build back’ and ‘build forward’ reports and... Read More

Learning to listen: ‘No sense making about me without me’

At the start of the pandemic one women told her support worker “I’ve been told what to do for years, this is nothing new”. We know that policy decisions... Read More

The one thing we all need after the pandemic is a new beginning. Change is in the air, whether that be ideological, legislative, or deeply personal. The theme for... Read More

Other than being Bernie Sanders’ Congressional seat, we have picked up at A/UK on the singular qualities of the state of Vermont – as a “laboratory for democracy”, in... Read More

What should Kendal do about climate change? That was the challenge tackled by a diverse group of local residents of Kendal during the summer and autumn of 2020. Commissioned... Read More

Local innovations to solve the problems that matter

The COVID-19 pandemic, with its many challenges has tested our ability to innovate. Many of us associate the idea of innovation with bright, new objects or processes, and this... Read More

Across the country in communities, in health services and in local authorities, a change has been happening. From East Ayrshire and Cambidgeshire to Leeds and Plymouth, leading public service innovators have been redefining the relationship between... Read More

How workers can take on big finance and win

The impact of Covid-19 has been a powerful reminder of the leverage workers could collectively hold. Care workers, supermarket cashiers and couriers – usually dismissed as ​“unskilled” – have demonstrated... Read More

When we think about building back better, we are thinking about power and how we make decisions, said Compass’s Frances Foley, introducing a webinar on citizens assemblies called Deliberating and doing:... Read More

Use Covid recovery to get to net zero: the Citizens Assembly’s verdict

In the first of its kind in the UK, a National Citizens Assembly has deliberated and this week produced a detailed set of recommendations to get the UK on... Read More

Deliberating with care for a caring democracy

Sometimes, when times seem unlike anything we have known before, we need to reach for ideas that are not new. The current crisis does not necessarily mean that we have... Read More