What should Kendal do about climate change? That was the challenge tackled by a diverse group of local residents of Kendal during the summer and autumn of 2020. Commissioned by Kendal Town Council and facilitated by Shared Future, we believe the Kendal Citizens Climate Change Jury was unique in being both the first fully online Climate Change Jury in the UK and also by the way it mobilised citizens through a crowdfunding campaign. 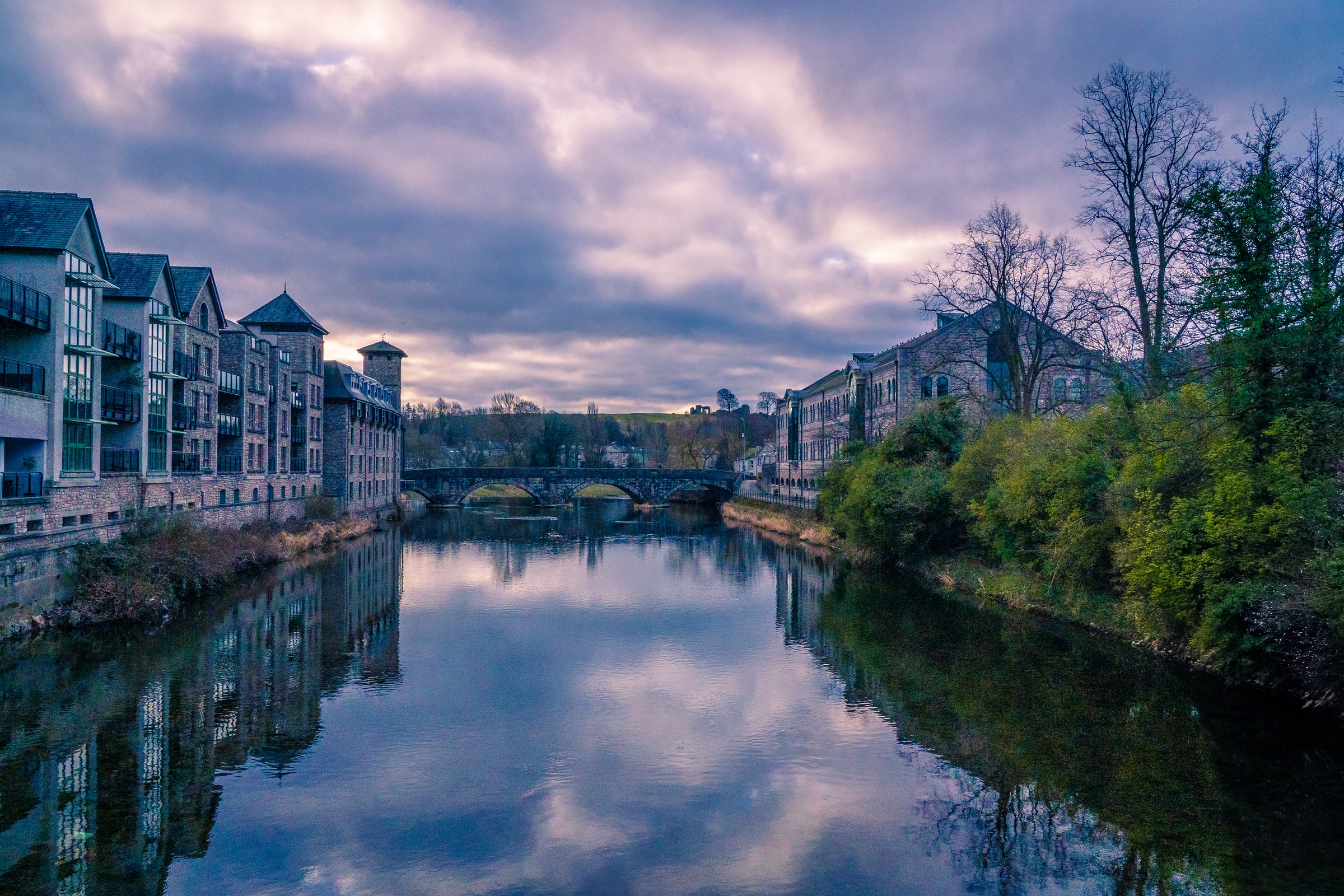 A People Powered response to the Climate Emergency

The support of many committed volunteers and supporting organisations has hugely contributed to its success. You can find out about the jury on their website.

Read the Recommendations of the Kendal Climate Jury.

The next step for Kendal’s Citizens Jury is a Recommendations Panel where organisations will be invited twice a year to share progress and best practice and develop partnership approaches to climate challenges.

Watch the many expert Presentations considered by the jury members.

This video highlights the incredible work of the members of the Kendal Climate Change Citizens Jury. To find out more, or to get involved and help action the recommendations make contact via https://www.kendalclimatejury.org.

Thanks go to Land and Sky media for producing this film and all the volunteers who made the Jury possible.

This was originally posted on the Shared Future blog on 23rd February 2021.

Green space access is not equal in the UK

A growing gap in green space provision divides the UK according to recent research, with people in northern cities having access to fewer parks than their southern counterparts. Nationwide,... Read More

This piece on a ‘Democracy of Citizens’ is #8 in the ‘Visions for the Future of Democracy’ series curated by Involve for its 15th anniversary. We have asked authors to... Read More

The 51%: Gender equality at the heart of a more inclusive economy

What if gender equality was at the heart of local plans for a more inclusive economy? Efforts to rebuild and recover economic prosperity in a time of crisis often... Read More

Beyond the framework: the co-benefits of deliberation

Levelling up is never going to be one size fits all. To support the development of areas that currently have poorer economic and social outcomes, we need to recognise... Read More

How can local people take action on things that matter to them?

How can local people build control and take action on things that matter to them? Our research shows that there are five main components of collective control: social connectedness;... Read More

Nearly half of the global population – between 3.3 and 3.6 billion people – lives in areas highly vulnerable to climate change. The brief window in which to limit... Read More

Recent years have seen a growing number of local councils across the UK, including Birmingham, Sandwell and Wigan, as well as the devolved administrations in Scotland and Wales adopting... Read More

Economists no longer talk of decarbonisation as a cost; climate action is now widely seen as an investment. Like any investment in new economic sectors, money spent is expected... Read More

Shaping Our Future: a Wellbeing Framework for the North of Tyne

Levelling up White Paper: you can’t level up from Whitehall

The Levelling up White Paper was finally published last week.  But despite 332 pages of what was a rather chaotic document (part text book, part policy, part analysis), when... Read More

Wellbeing: how living well together works for the common good

The World Health Organization (WHO) describes mental health as “a state of wellbeing in which an individual realises his or her own abilities, can cope with the normal stresses of life,... Read More

Plymouth Octopus is a cosmolocal CAN in action

As we know from long experience, Plymouth is a world-class powerhouse of social and civic enterprise – and it’s richly demonstrated in the Plymouth Octopus latest newsletter. POP (as... Read More

We can’t level up without restoring nature

The government’s favourite term, ‘levelling up’, contains little meaning – just enough to be politically useful, but not enough to support any real plan. At NEF, we investigated the role of... Read More

At the close of the 2021 Community Wealth Building Summit, we reflect on remarks by our opening keynote speaker Tom Arthur MSP and the work that CLES has undertaken... Read More

Lessons from a citizens’ jury on climate change

With COP 26 starting in Glasgow on 31st October 2021, we have brought together the recommendations from six citizens’ juries and assemblies run by Shared Future over the last... Read More

This is an article from the fourth issue of the New Economics Zine. You can read the full issue here. Last month, over 500 workers at the GKN car factory... Read More

Land justice: this land is our land

This is an article from the fourth issue of the New Economics Zine. You can read the full issue here. Land is ultimately about power. Those who own the land... Read More

On the eve of COP26, and with the challenges we face in tackling the climate crisis becoming ever more apparent, CLES and Carbon Co-op today release a major new toolkit for councils,  a... Read More

You can’t achieve levelling up without a Green New Deal

This is an article on levelling up and the Green New Deal from the fourth issue of the New Economics Zine. You can read the full issue here. ‘Levelling up’... Read More

Doughnuts are popular in Devon

We have long seen Devon and the English South-West as a social, economic and cultural laboratory for what might look like an “ecological civilisation”. So it’s perfectly logical that... Read More

Resources for the metropolises of the 21st century

Adam Lent and Jessica Studdert look at the practical ways to make community power an everyday practice, not just a long-term ambition. How can community power be embedded in... Read More

Levelling up from the ground up

Depending on where you live in England, there can be huge differences in your quality of life. This is down to some areas’ economic decline and low incomes, but... Read More

The road to recovery

The past year has been extremely difficult for all of us. Over 4 million people in Britain have tested positive for Covid, and over 150,000 people have died with... Read More

The Case for Growing our Own Beans

The one thing we all need after the pandemic is a new beginning. Change is in the air, whether that be ideological, legislative, or deeply personal. The theme for... Read More

What does Covid-19 mean for the inclusive growth agenda?

What’s the role of inclusive growth in recovering from crisis? It’s easy to see as a ‘nice-to-have’, but can be at the centre of helping us build back better.... Read More

What’s Earth Day got to do with Wellbeing?

“In nature nothing exists alone.” Rachel Carson, Silent Spring (1962) Over the last 13 months – and during a time of isolation, separation, and loneliness – many of us... Read More

Community food systems should be part of the new normal

With last year’s long queues and supply issues at supermarkets, the Covid pandemic has made us all re-examine how we get our groceries and where they come from. But... Read More

Other than being Bernie Sanders’ Congressional seat, we have picked up at A/UK on the singular qualities of the state of Vermont – as a “laboratory for democracy”, in... Read More

Three lessons from Bogota on making cities safer for women

In the UK, Sarah Everard’s murder has prompted debate around women’s safety, with 80% of women of all ages having been sexually harassed in public spaces. In Bogota, work is being... Read More

Cities must cut their ‘consumption emissions’ – here’s how

Almost every city now has some form of climate target. For instance Manchester, in northern England, aims to be zero carbon by 2038. But such targets generally focus on emissions... Read More

Caring for the earth, caring for each other

During the peak of the first lockdown, people gathered on their doorsteps to clap for carers. Now it’s time to truly recognise their value. The inadequacies of England’s current... Read More

The time is right for a children’s Wellbeing Budget

In so many ways, Scotland is a wonderful place to grow up. In a global context we have free education and health care, access to an environment noted around... Read More

On 11th March, we released our yearly analysis of the contribution that Manchester City Council’s procurement spend makes to the city’s economy and how it can support the achievement of wider... Read More

Building Back Better with a Green Industrial Revolution

The Covid-19 pandemic has disrupted the UK economy and, nearly a year on from its outbreak, the number of people unemployed continues to rise. The latest figures show that an... Read More

What should Kendal do about climate change? That was the challenge tackled by a diverse group of local residents of Kendal during the summer and autumn of 2020. Commissioned... Read More

When we exalt the power of the local, sometimes we mean really local. We were alerted to this stirring Glasgow story this week. A patch of ground in the... Read More

Local innovations to solve the problems that matter

The COVID-19 pandemic, with its many challenges has tested our ability to innovate. Many of us associate the idea of innovation with bright, new objects or processes, and this... Read More

The Covid-19 pandemic has shone a light on the discrepancy between the work we most urgently need as a society, and the work we value and reward. So many of... Read More

Sustainable cities after COVID-19: are Barcelona-style green zones the answer?

The lockdowns and restrictions introduced to control the spread of COVID-19 have resulted in huge changes to urban life. Previously bustling city centres remain empty, shunned in favour of suburban or... Read More

I was lucky enough to chair a panel discussion on Community Ownership and Towns this week, with Community Land Scotland, Greener Kirkcaldy, Power to Change, The Stove Network.* We recognised, with many others, the High Street... Read More

The case for a four day week

Shorter working time should be at the heart of post-pandemic recovery. That’s the message of The Case for a Four Day Week, published by Polity this month, and written by... Read More

The coronavirus pandemic has exposed and aggravated the economic insecurity experienced by a growing number of members of society.  This may encourage greater understanding of the acute insecurity typically... Read More