Tear up the script, start with a blank page and change the narrative!

These statements are drawn from a group of community development activists, practitioners and academics from across the UK and Ireland who attended the 2015 event Community Action in an Age of Austerity in Hull. It was convened and facilitated by Avila Kilmurray and Barry Knight and supported by Barrow Cadbury Trust. It was hosted by Sinead Gormally and Gill Hughes from the University of Hull. Some key people from the city of Hull were invited, including Andy Dorton (who has many roles: Church of England social responsibility officer, chair of Developing Our Communities (DOC) and then serving as a city councillor), Paul Spooner (Maximum Life youth project) and Karen Tozer (Groundwork).

What arose at this event was the desire to rethink poverty and to change the narrative from the dominant discourse of deficit communities. Andrew Milner captured the essence of the discussion:

Start with a blank page.

Tear up the old script. It’s false and harmful. The media uses it to bully the poor and vulnerable, showing them as objects of ridicule or revulsion. The government … seems not just indifferent, but hostile. The solidarity that once bound people to each other, their main support in adversity … has been eroded leaving poor people isolated and anxious.

If we are going to change this, we need different ways of communicating. We are too prone to talk just to ourselves … [continuing this] how on earth will we convince others?

We need to tell … straightforward stories in direct and persuasive ways. Or better still, get the people we work with to tell them themselves … This won’t always be words – pictures, films, other art forms are more immediate and persuasive than written narratives.

This meeting invigorated and inspired creative discussions about how this might unfold and the importance of engaging with ‘unexpected allies’ and moving beyond the cosy conversations with the already converted. 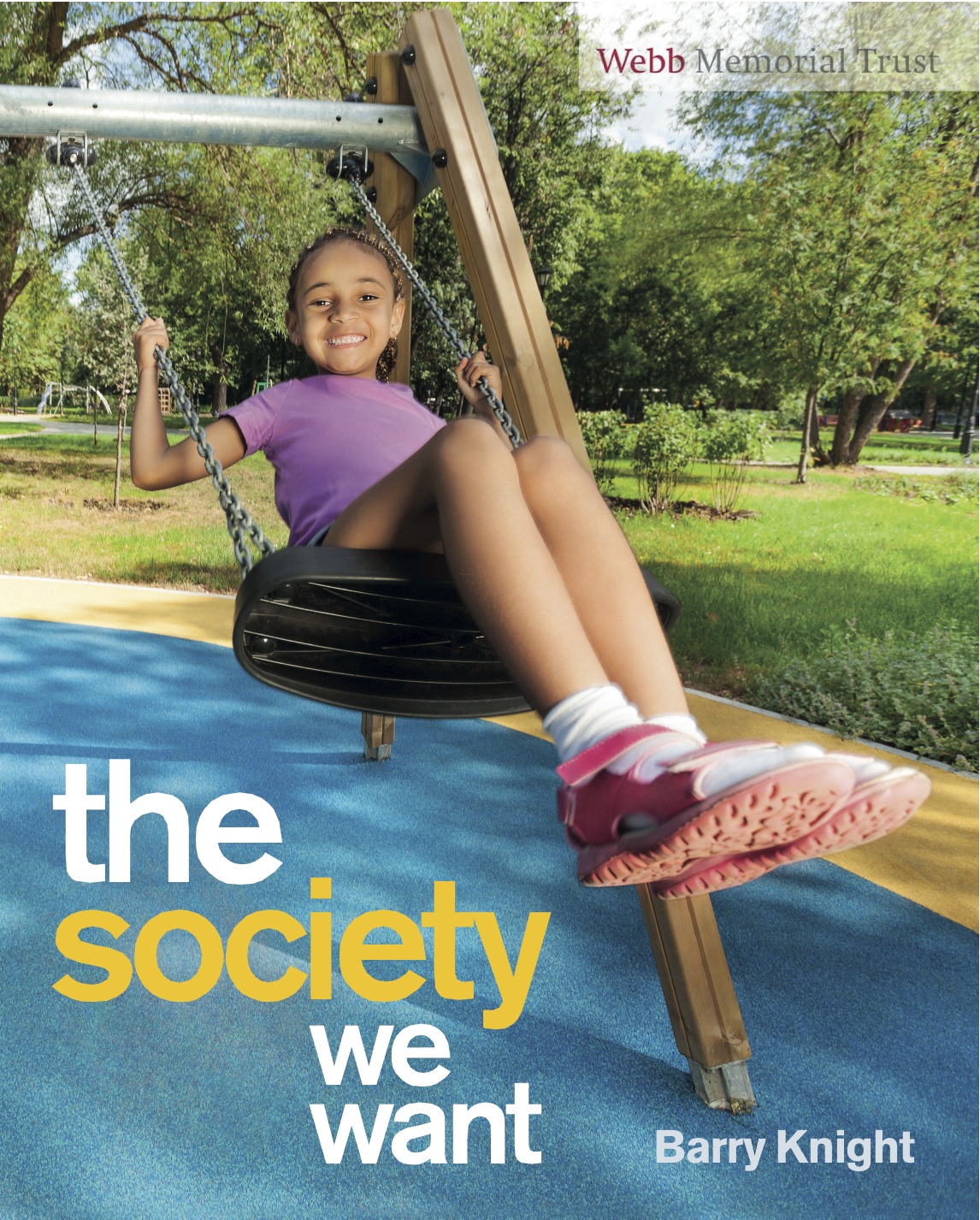 Barry Knight gave an overview of the life and work of Beatrice Webb, and what surprised many in the audience was that her intent, with Beveridge, had been for an enhanced civil society alongside the state in delivering welfare reforms. Post 1945, the state took centre stage. However, from 1979 the neoliberal agenda encapsulated in Thatcherism saw the state rolled back as far as possible, generating a gap which the voluntary and community sector attempted to plug. Interestingly this initiated ‘spaces in between’ for innovation and creativity offering alternative needs-led provision. However, this became challenging with service level agreements, competitive funding and an increasingly target-related, payment-by-results culture. Despite this, the inspiration derived from Barry Knight’s (2015) booklet The Society We Want provided the impetus to continue meeting to discuss how we could create a movement for change in Hull.

Austerity yet creativity in Hull

Hull, or Kingston-Upon-Hull, has been cited as the 10th most deprived city in the UK. However, despite all manner of difficulties and more recent savage austerity cuts, there is still vibrancy, hopefulness and a commitment to creative and resourceful projects working with communities to rethink poverty; projects which do not always rely on funding and have occupied ‘spaces in between’.

In later meetings during 2016 and 2017 more people joined the discussion, Barry talked about his work, the context from which it originated, and the subsequent initiatives that the Webb Memorial Trust generated across the country. He saw the appetite in Hull for this different way of thinking and doing, and the culture of mutual aid and reciprocity. In his 2017 book Rethinking Poverty: What makes a good society? (p 122) he cites Kate MacDonald from Timebank: ‘people and places like Hull are too often defined by a deficit – what they lack – rather than an asset, what they have.’

The steering group in Hull expanded through a cascading process, with more people inspired by the ideas and some joining the steering group: Kate MacDonald, Timebank and Mutual Aid Network; Lloyd Dobbs, Goodwin Development Trust; Dave Shepherdson, formerly Hull Coin; and Sarah Hatfield, formerly Child Dynamix, now Timebank; Julie Rippingale, University of Hull, Youth Work and Community Development (YWCD); and more recently Christine Smith, University of Hull, YWCD. There are many more people and organisations who have since aligned with #thehullwewant as partners.

Georgia Smith, formerly of Webb Memorial Trust, is to thank for #thehullwewant logo. While recording one of the events, she took a picture of the sky, and it became the backdrop for #thehullwewant, encapsulating the desire to reimagine a future without poverty.

What do we do?

#thehullwewant aims to engage people to think about what is possible, what contributions they can make by ‘working with’ people rather than ‘doing to’ them. The approach is not to look for what is wrong but to find and celebrate what is strong – by taking an asset-based approach to community development, unlocking local assets and resources, and recognising, valuing and building on what already exists within communities to #ShiftThePower to the people.

This city-wide initiative is hosted by the Youth Work and Community Development team at the University of Hull. The project started out with a hub in Goodwin, in the west of the city, and it cultivated a hub in the east with new partners – the Freedom Centre, Child Dynamix, particularly the Hut youth centre, and EMS Yorkshire Ltd. The project is now expanding into Greatfield (see Gill Hughes’ blog on the Real Estate Radio Show) and Beverley Road, the latter involved in major regeneration and heritage projects.

#thehullwewant gathers stories – but this is not just a talking project; it is a doing project. It is a mix of participatory action research, asset-based and radical community development; it is about working with communities to identify their needs and decide on solutions, facilitating social transformation and promoting social justice for all. People are the experts in their lived experience, and so #thehullwewant is a facilitator not the director of the process. Together we aim to generate hope and possibilities, and to build alliances across communities, from the west of the city to the east, across intergenerational and intercultural borders. This means bringing new and established communities together to facilitate solidarity and connectedness, enabling people to reimagine #thehullwewant and in turn ‘the society we want’, building a movement by developing relationships to create social change.

#thehullwewant is working on a layered approach to facilitate the voices of communities to influence and impact on a wider scale. Where issues or dreams can be addressed locally, the project first engages with the communities and their assets and then, where needed, enlists local partners. This includes working locally with city councillors and officers, addressing issues in local areas and where possible influencing policy; regionally with the office of the Crime Commissioner, feeding into policing strategies and mobilising resources for community safety; and nationally with Members of Parliament and Rethinking Poverty partners to raise issues. This diagram shows the project’s various layers of engagement – starting with the grassroots and feeding into the policymakers to engender transformative change. 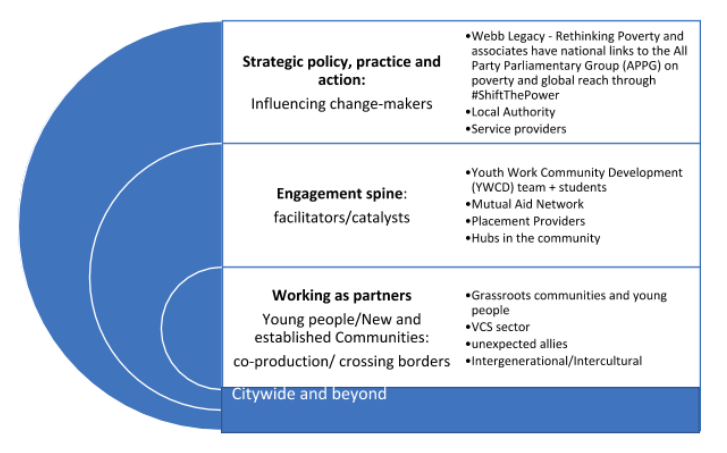 This project enables local people to have their voices heard in determining what they want for themselves, for their community, for #thehullwewant and for a good society.

Looking Back Better: the Future Forum on climate change

While human suffering is not a win for climate justice, could new timescales for international cooperation foster the mechanism for urgent environmental action? Our body has a virus, a... Read More

Looking Back Better: the future forum on technology

With our worlds increasingly online, young people’s contribution to the design of our digital future is essential.  Unsurprisingly, the impact of technology (both positive and negative) wove its way... Read More

Looking Back Better: The future forum on education

Students challenge a restrictive curriculum: why education should be more than academic. The subject of education is perhaps the area where we are naturally most willing to accept the... Read More

Tear up the script, start with a blank page and change the narrative! These statements are drawn from a group of community development activists, practitioners and academics from across... Read More