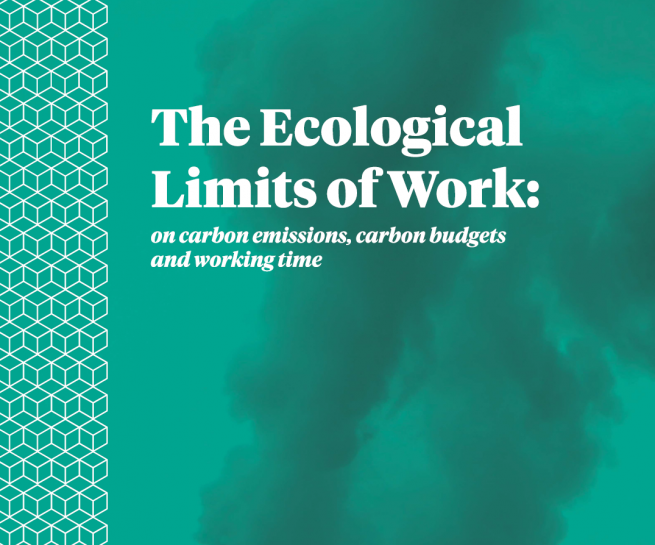 A new paper from Autonomy UK, The Ecological Limits of Work: on carbon emissions, carbon budgets and working time, written by Philipp Frey, explores working hours and productivity in relation to the climate crisis. It asks the question:

Frey examines ‘the connection between working hours and greenhouse gas emissions’ in order to present a framework to assess sustainable levels of working hours in the UK, Sweden and Germany. The paper finds that ‘based on today’s levels of productivity and carbon intensity’, a sustainable working week would need to be less than ten hours per person, ‘even in relatively carbon-efficient economies such as Sweden’.

The paper acknowledges that reducing working time as an isolated policy would be insufficient in tackling climate change, and suggests

‘it needs to be supplemented by other policies facilitating radical economic transformation, for instance to shift jobs from sectors such as manufacturing and fossil fuel extraction towards employment in service professions and green jobs (e.g. reforestation operations).’

It also acknowledges that reduced working hours could lead to a ‘qualitatively better life’ and could counteract the ‘significant negative impact on individual wellbeing and mental health’ that the intensification of work has on the public.

Finally, Frey calls for ‘the momentum that is behind the demand for a shorter work week’ to be used ‘to discuss even more ambitious goals in terms of ecological sustainability and time prosperity’. He writes:

‘If ecological sustainability requires an overall decrease in material consumption, a vast expansion in terms of leisure time and thus an increase in “time prosperity” would be less of a luxury and more of an urgency.’