On the 6th July CLES launched the final report of the Liverpool City Region Land Commission: Our Land. Reflecting the findings of England’s first Commission to review the use of land for community wealth building, the report argues that a new approach to land should put communities, not profit, at its heart. Below, CLES’s Isaac Stanley reflects on the Commission’s nimble approach and the radical recommendations found in the report. 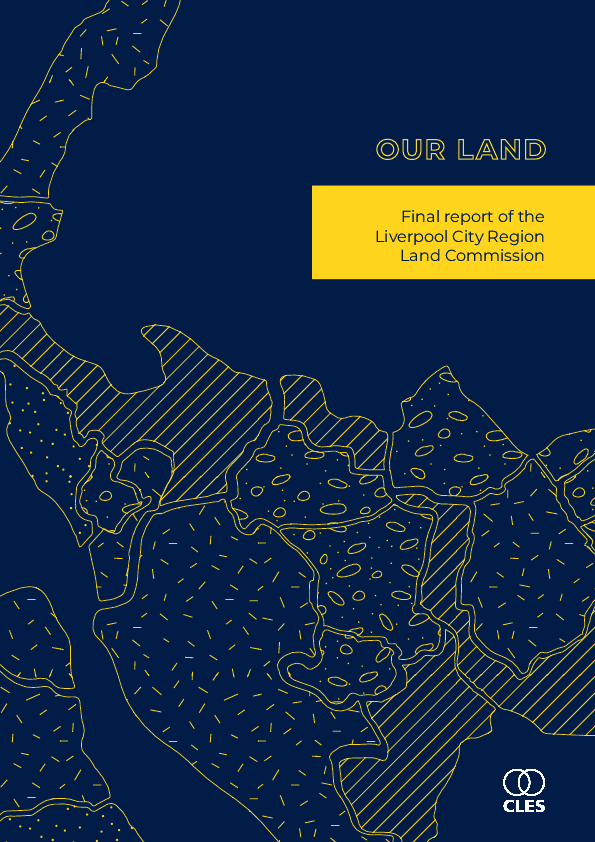 The Liverpool City Region Land Commission was launched in September 2020, at the initiative of Metro Mayor Steve Rotheram. Facilitated by the Centre for Local Economic Strategies (CLES), the Commission gathered together thirteen experts on democratic land reform, ranging from activists involved in community land trusts, makerspaces and social enterprise incubation to academics and national planning policy reformers and international campaigners for the commons.

They were invited to “think imaginatively and come back… with radical recommendations for how we can make the best use of publicly-owned land to make this the fairest and most socially inclusive city region in the country”. This report, prepared by CLES, is based on the deliberations and contributions of the Commissioners and presents their key findings and recommendations.

The report recognises that land is the fundamental basis of wealth for communities, and that attempts to ensure that communities benefit from fairer ownership and stewardship models for land face significant challenges in England. It traces the history of ideas and practices around land ownership, focusing particularly on the history of the Liverpool City Region, in order to gain a deeper understanding of present-day challenges around land justice. It explores how land came to be understood as a commodity to be bought and sold, and later attempts to push back against the effects of this commoditisation through slum clearance and municipal home building.

Marketisation since the 1980s has led to a reassertion of the idea of land as a commodity, coming to be treated primarily as a financial asset and the object of speculative lending and investment. The privatisation of public space has featured heavily in the approaches to regeneration that have resulted. While new luxury developments spring up in Liverpool city centre, the poverty north of the city has been left largely untouched. Additionally, for many Black Liverpudlians, regeneration has been associated with heavy-handed programs of rehousing following the Liverpool 8 (Toxteth) riots.

“a range of emerging alternative models and policies”

How, then, can we move towards a more just approach to land in the Liverpool City Region? To explore this question, the report surveys a range of emerging alternative models and policies for promoting socially, environmentally and economically beneficial forms of land use. It looks to the past, present and future, paying attention to experimentation in the Liverpool City Region and beyond. It first considers a range of alternative models of ownership, emphasising that “outright ownership” as commonly understood is but one possibility within a broad spectrum of models of tenure. It pays particular attention to Community Land Trusts and “social incubator” models, which have both achieved noted successes in the city region in recent years. It notes the key challenge of developing institutional infrastructure which could underpin such initiatives, which are currently often disconnected and over-reliant on time and energy from committed volunteers.

It also considers a range of regulatory and policy instruments available to promote the more socially, environmentally and economically beneficial use of land. These include instruments associated with the planning system, where a key challenge is to combine elements of the post-war development corporation approach – notably the capacity to take control of land for collective benefit – and combine it with a democratised form of common governance. They also include policies to promote the responsible stewardship of land, and in particular to prevent dereliction and indefinite vacancy that negatively impacts surrounding communities. Finally, they include policies which secure “social value” from the use of public land and property assets, for example promoting socially and environmentally conscious business activities.

The report offers 13 action-focused recommendations to advance more generative forms of land ownership and stewardship. These offer concrete, realisable steps which can serve as staging posts towards a fundamentally different future, including:

Working on the Land Commission has been a rich experience, and we are excited to see the next stages unfold as its recommendations are published. We hope that the work of the Commission will provide inspiration for other local authorities and activists who wish to do things differently, so that their land can serve the needs of the whole community.

Isaac Stanley is a senior researcher at CLES. @isaacmstanley

This was originally posted on the CLES blog on 6th July 2021.